I'm embarrassed to say it's June and I'm sitting here typing away in my shorts and bra, good job we have no guests and I have the nerve to be blogging about New Years Eve, but here goes.

Last year I travelled back from Brighton on New Years Eve having been there welcoming my new baby grandson Jaxon into the world, I was shattered on arriving home after a wonderful time so we just went to bed early. This year however Alan had asked me if I fancied going into Cordoba to see the new year in. We had been two years ago and had a great night. It's tough being away from family and friends on these special times and especially as it's my dad's anniversary. I'm often tempted to stay at home and enjoy some quiet time reflecting but I bit the bullet and said yes let's go.

We weren't going to be caught out like last time, expecting bars and a few shops to be open.  When we arrived two years ago the city was deserted until around 11.00... yes at night, and nowhere was open to buy a drink! This year we left home later with a bag of drink and some goodies and  joined in the fiesta.

We hadn't been there long and the crowds were begining to build. Families that had enjoyed a family meal together and wanted to celebrate the new year with others. Most wouldn't venture out of their homes until midnight had struck. Suddenly we saw a tall figure we recognised, it was our mate Ken, if you have been reading my blogs for a while you may remember Ken the Good Samaritan. He would help us out when our generator conked out, or if ole Frank the car needed a bit of TLC, there was Ken wandering across the square in front of us.

We called him over and there we all stayed, three Brits in a Spanish square celebrating the new year, wondering what 2015 would bring us all. We chatted and people watched as the fun loving Spanish arrived, some in the smartest of clothing, others more casual wearing funny hats with balloons and party blowers. All with their bags of posh drinks, snacks and grapes. The excitement was building and the Spanish were getting their grapes and cava ready or in some cases champagne. Most even had champagne glasses with them. As the clock struck midnight the city becomes silent as they begin eating their 12 grapes. Apparently if you manage to eat all 12 grapes on time you are in for a year of prosperity and good luck. Once all the grapes have been eaten  you hear calls of  “Feliz Año Nuevo!” as everyone hugs and kiss each other, whether you know them or not.

Then of course every Spanish city loves it's fireworks and Cordoba is no exeption. They banged and crashed above and all around us for what seemed like ages, and then the dancing began again. Ken, Alan and I stayed for an hour or so more then we headed home, we had a 45 minute journey ahead. It was a fab evening and good to spend it with a friend also.

Apologies for the blurry man. Maybe he was dancing fast! 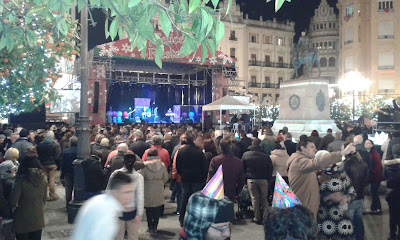 Alan and I, with Ken 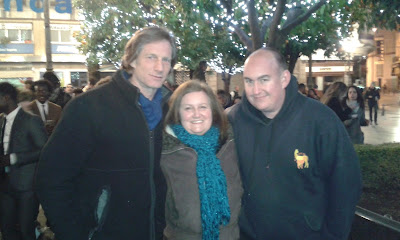 Posted by Lorna Penfold at 9:52 AM 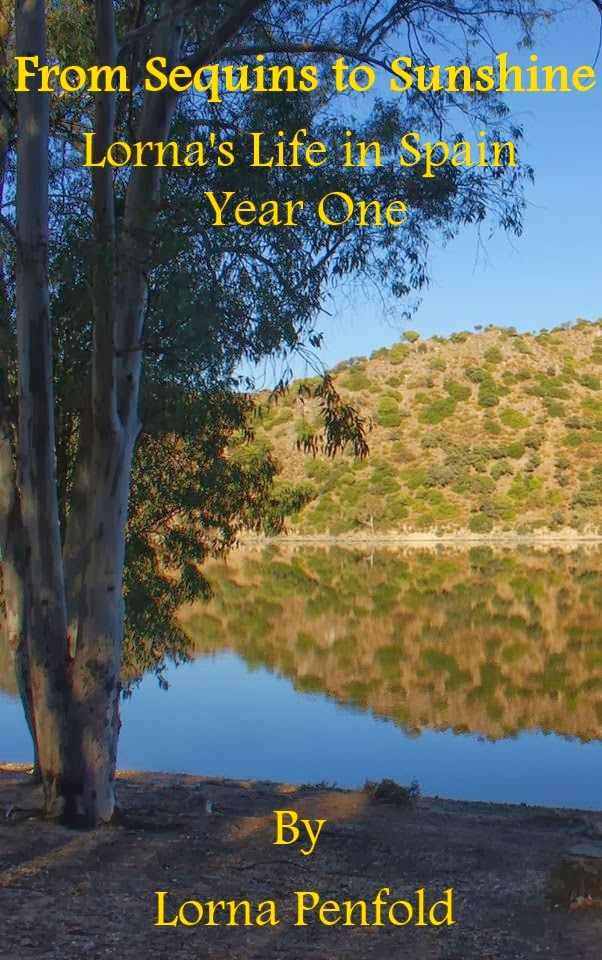 Why not try a holiday with us? 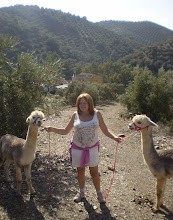 Taking two of the boys for a walk, near where we live!

Lorna Penfold
Montoro, Cordoba, Spain
Myself and Alan my partner, decided to move to sunny Spain on the spur of the moment in June 2007. I had been unwell and was really struggling with work. One day as we were walking Geri the dog Alan said "Why don't we move to Spain, and breed alpacas?" About two days later I said ok, let's do it. Mental or what! I have two wonderful children, Mark who is 31 and is still in Brighton, and Frankie who is 26 and decided to come with us, with her boyfriend at the time, Chris. But more news on that as you read on... Oh and Geri the dog of course! Jabs and passport sorted she was ready to enjoy the sunshine! I now also have the 2 most beautiful granddaughters I could ever wish for. Kaci and Maisie, who are 5 and 4, plus the scrummiest grandson Jaxon who is just a year old! Oh dear it does make it so hard to say goodbye!